Are the simulated climatic and dynamic mass losses of the Greenland Ice Sheet decoupled during the next 100 years? 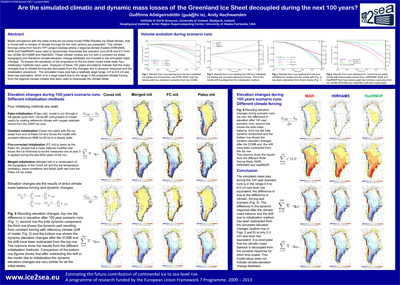 Model simulations with the state-of-the-art ice sheet model PISM (Parallel Ice Sheet Model), that is forced with a number of climate forcings for the next century are presented. The climate forcings come from the EU FP7 project ice2sea where 3 regional climate models (HIRHAM5, MAR and HadRM3P) were used to dynamically downscale two scenario runs (A1B and E1) from two GCMs (ECHAM5 and HadCM3). These climate models are run with a constant ice sheet topography and therefore climate-elevation change feedback not included in the simulated mass changes. To assess the sensitivity of the projections to the ice sheet model initial state, four initialisaton methods were used. Analyses of these 100 years simulations indicate that the mass changes due to climate forcing are decoupled from the changes due to dynamic response and the initialisation procedure. The simulated mass loss has a relatively large range, 0.5 to 6.5 cm sea level rise equivalent, which is to a large extent due to the range in the projected climate forcing from the regional climate models that were used to downscale the climate fields.