Mountain building and the initiation of the Greenland Ice Sheet 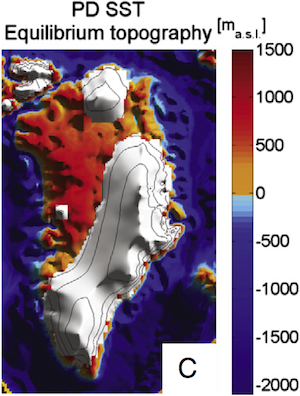 In this paper, effects of a new hypothesis about mountain building in Greenland on ice sheet initiation are investigated using PISM in combination with a climate model. According to this hypothesis, low-relief landscapes near sea level characterized Greenland in the Miocene. Then two phases of km-scale uplift, beginning at 10 and ~5 Ma, respectively, initiated the formation of the present-day mountains. These results are consistent with the observed climatic variability superimposed on the general cooling trend in the late Cenozoic, and they indicate that the Greenland Ice Sheet of today is a relict formed under colder conditions. The late Cenozoic mountain building in Greenland augments the effects of the climatic deterioration leading to the Northern Hemisphere glaciations. Without the second phase of uplift, the Greenland Ice Sheet would have been more sensitive to the changes in climate over the past millions of years.