Reconciling the ICE-6G_C reconstruction of glacial chronology with ice sheet dynamics: The cases of Greenland and Antarctica 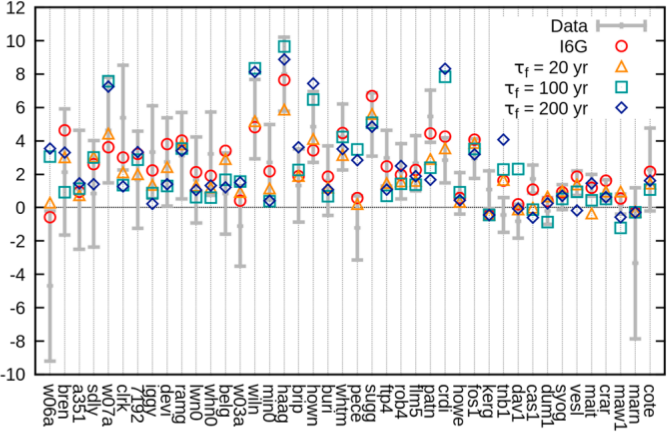 ICE-6G_C ice thickness histories come from present-day uplift rates, exposure-age and radiocarbon dating, the theory of glacial isostatic adjustment (GIA), and a self-consistent theory of sea level. Such reconstructions are independent of ice dynamical approximations. This paper asks whether ICE-6G_C histories for the Greenland and Antarctic ice sheets are compatible with ice dynamics as represented by PISM models. They infer compatibility when uncertainties in mass balance history are taken fully into account. Uncertainties in atmospheric and sub-shelf mass balance since the Eemian (-122ka)—here represented by the SeaRISE paleo-modeling choices, along with simplifications in the PISM ice dynamics model, are carefully considered in a time-dependent inverse-modeling framework. Modeled Holocene shoreline evidence for relative sea level changes, present-day ice velocities, and present-day uplift rates (figure at left), are used to assess the agreement. The magnitudes of the mass balance modifications needed to “nudge” the thicknesses toward ICE-6G_C values, with several relaxation timescales considered, are evaluated as a measure of misfit between the reconstruction and the ice dynamical simulation.