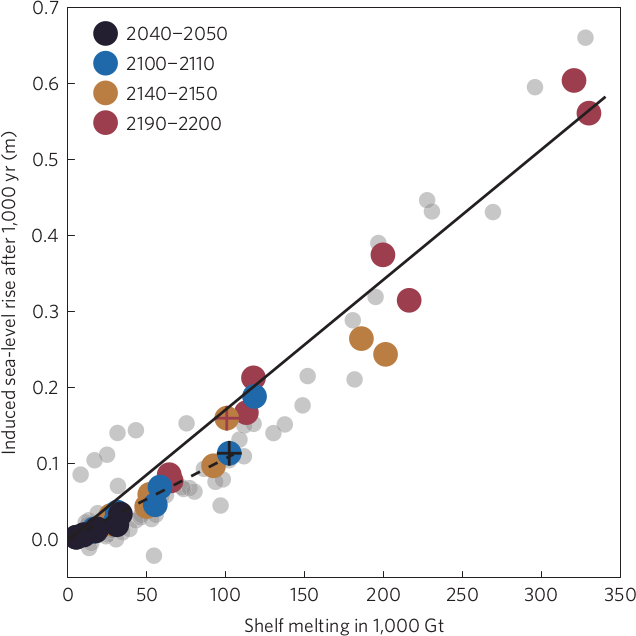 This paper might best be understood as the second of three studies, by these authors, of three Antarctic ice sheet/shelf basins. These basins are among the biggest and, before studying their properties in detail, the most potentially unstable. But the PISM model results do not suggest all of these basins act the same. The first of these papers, M. Mengel and A. Levermann (2014) “Ice plug prevents irreversible discharge from East Antarctica”, suggests that the Wilkes basin is likely to destabilize under sufficient forcing to remove a certain (quantified) amount of near-ocean ice, but that the time scale of destabilization is long. The third of these papers, J. Feldmann and A. Levermann (2015) “Collapse of the West Antarctic Ice Sheet after local destabilization of the Amundsen Basin”, which just appeared in November 2015, demonstrates the fast, and very large in magnitude, destabilization of the whole of WAIS from an Amundsen Sea basin forcing. The current paper suggests that, by contrast, the Filchner-Ronne basin is essentially stable in the sense that the forcing dominates its response. Ocean models do indicate an abrupt intrusion of warm circumpolar deep water into the cavity below the Filchner–Ronne ice shelf within the next two centuries. The basin’s retrograde bed slope would allow for an unstable ice-sheet retreat, but the buttressing of the large ice shelf and the narrow glacier troughs tend to inhibit such instability. This paper’s main result, as shown in the graph at left, is that buttressing “wins”. Stronger forcing (“shelf melting”) generates greater ice loss, but there is no tipping point as with the other basins. The response is roughly linear.