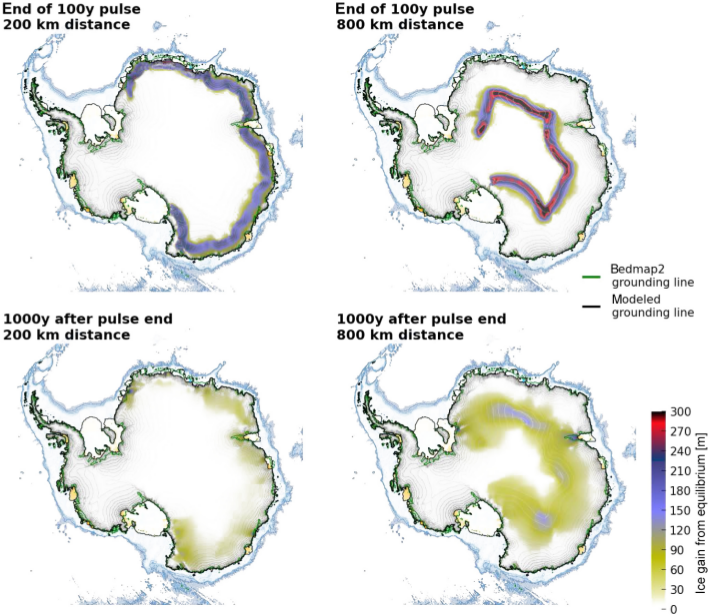 This paper uses PISM to estimate the time-scale on which the East Antarctic ice sheet (EAIS) can be used as temporary storage of the ocean. The geoengineering goal of such an action would be to reduce sea level everywhere by reducing global ocean volume. The ice dynamics modeling aspect of this investigation suggests that the time-scale before the EAIS starts to “put back” the water, by accelerated flow into the ocean, is shorter than the pure advection result using present-day velocities would suggest. That is, under the schemes tested, a significant kinematic wave propagates faster than the interior ice flow speed. It alters flow rates at the margin through steepening, and this shortens the effective storage time. (The ice delivered at the margin is not the sea water put into the interior.) While ice flow modeling is part of the analysis here, engineering, economic, and ethical factors are also examined. The analysis suggests, for example, that a terawatt of (non-fossil-fuel!) electricity generation capacity–perhaps wind turbines–would be needed to drive pumps to lift the water kilometers vertically and hundreds of kilometers inland. Geoengineering is a loaded term, of course. Once mentioned, effort is needed to separate the “should” from the “could” of geoengineering proposals. In any case, this paper shows ice sheet models surely contribute to answering science questions with societal and political impacts. See also press releases by the Potsdam Institute and Columbia University, as well as articles in Newsweek, the Washington Post, and the Christian Science Monitor, among other places.