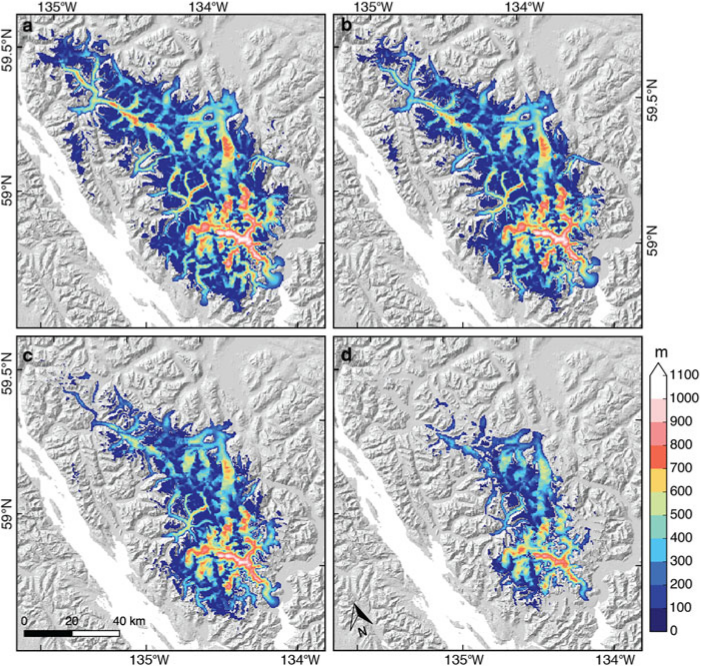 The large icefields of North America are geometrically-complex. They are exposed to heterogeneous climatic conditions. They are intermediate in size between the individual mountain glaciers and ice sheets which are common modeling targets. And thus they are a good test of the capability and effectiveness of ice dynamics models. This paper studies the 4000 km^2 Juneau ice field straddling the USA/Canada border using PISM. Perhaps it is no surprise that the modeled outcome of a future warming scenario is (1) loss of much of the glacier volume, and (2) strong dependence of the outcome on the precipitation and surface mass balance inputs. Climatic observations are too sparse and unrepresentative to allow use of interpolated values for climate inputs, though this was attempted. Instead, atmospheric climate model (20 km Weather Research and Forecasting Model) output was used. Simulated and observed surface mass balance gave good agreement only after precipitation adjustments to account for unresolved orographic effects. Under a RCP6.0 emission scenario, the PISM results then project a decrease in ice volume by 58–68% by 2099 compared with 2010. If the modeled 2070–99 climate is held constant beyond 2099, the icefield is eliminated by 2200. With constant 1971–2010 climate, the icefield stabilizes at 86% of its present-day volume.