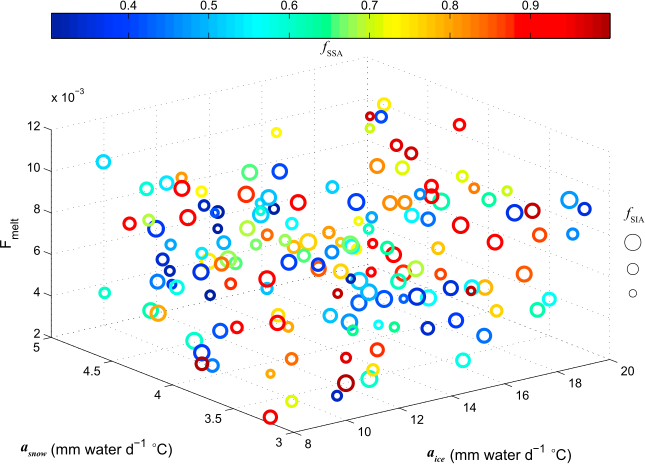 The middle part of the Piacenzian stage of the Pliocene (3.264-3.025 Ma BP) is a recent warm period in Earth’s history before Northern Hemisphere glaciation. It was characterized by global sea levels 10-40 m above present, which motivates a focus on the role of the Antarctic ice sheet (AIS). This paper investigates the influence of atmosphere and ocean forcings, topography, model parameters, and model resolution on the modeled AIS. The Norwegian Earth System Model is used to force the Parallel Ice Sheet Model at 15 km resolution. The result is a nearly-collapsed West AIS in the mid-Piacenzian, with no significant retreat of the East AIS. Increased air temperature plays the key role in the overall mass loss of the AIS, but its role is comparable to that of ocean warming in the West. For the PISM user not already studying this geologic period, this paper is interesting because of its use of Latin hypercube sampling (LHS) of a particular five-dimensional parameter space, denoted (a_snow, a_ice, f_ssa, f_sia, F_melt) in Figure 6 which is reproduced at left. Some results about this parameter space are (see Figure 7):