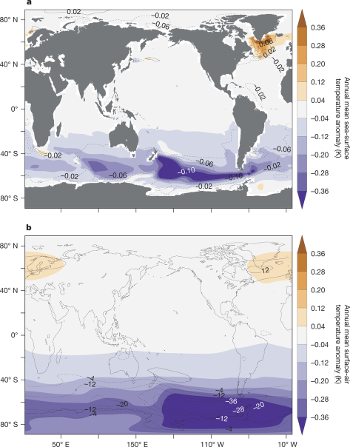 Little is known about the dynamical system formed when a marine-based ice sheet interacts with the global ocean/atmosphere circulation. While some understanding of this dynamical system can come from coupling ice sheet models to earth system models, this needs validation from observations on the relevant timescales of the coupled system. These timescales are likely to be multi-century, millennial, and longer. This paper describes coupled simulations using a PISM-modeled Antarctic Ice Sheet (AIS) with incomplete coupling to the global circulation. On the one hand, the AIS model is forced by Southern Ocean temperatures from the LOVECLIM Earth System model, while on the other the modeled AIS meltwater is used to force the UVic global climate model. The model results are compared to high-temporal-resolution records of iceberg-rafted debris for the last 8000 years from two sites in the Scotia Sea, which provide a spatially-integrated signal of ice sheet variability in the Holocene. The model and data share variability at centennial and millennial frequencies. The primary conclusion is that fluctuations in AIS discharge caused by relatively-small changes in subsurface ocean temperature can amplify multi-centennial climate variability regionally and globally. A dynamic AIS may have driven climate fluctuations during the Holocene.