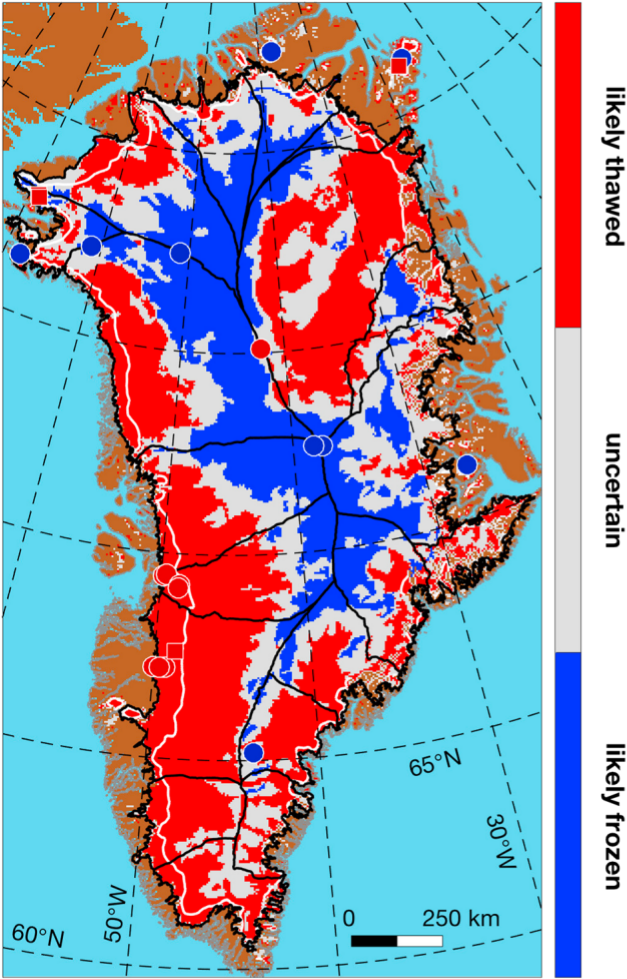 After the surface slope and the ice thickness, which determine the effect of the body force of gravity (the driving stress), the basal thermal state of an ice sheet is the most important boundary condition determining the stresses on a flowing ice sheet. The basal thermal regime is, however, the integrated effect of flow history. To model it one must track viscous dissipation of flow, sliding friction, and geothermal input, and compute the balance. Whether the balance is just above (thawed, wet, and weak) or just below (frozen and strong) the freezing point is then critical to dynamical boundary condition. The thermal state can only be observed directly at boreholes, which are few and biased toward cold, near-divide locations. To determine the basal temperature and melt rates for the Greenland Ice Sheet (GrIS), this paper combines a survey of observations, including borehole and less-direct observations (surface velocity, surface texture, and radiostratigraphy), with analysis of 3D thermomechanically-coupled model results from eight different models, including PISM, which participated in the SeaRISE assessment process. Such a synthesis has not been attempted before. Its conclusions about the distribution of melting conditions, such as the map at left, are much more likely to withstand scientific scrutiny than any individual model results or point measurements. The paper also delimits a specific large portion of GrIS, about one third by area, where additional observations would most improve knowledge of the basal thermal state.