Antarctic climate and ice-sheet configuration during the early Pliocene interglacial at 4.23 Ma 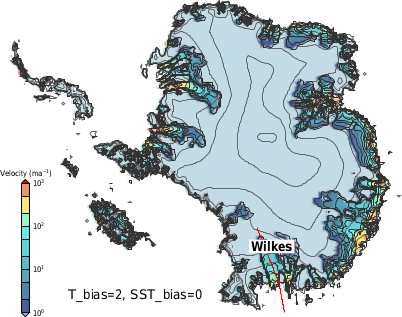 Whether a ‘tipping point’ will be reached in the next few centuries, in the dynamics of various parts of the Antarctic ice sheet (AIS) as it responds to a warming world, is the most difficult prediction question. It is an extreme challenge to models. How complete a model must be, so as to resolve the relevant behavior of the (real) dynamical system, is unknown. A negative result from modeling (i.e. no tipping points seen in model runs) has minimal value because a more-complete, or merely different, model may show a tipping point. Insisting that a model include all possibly-relevant mechanisms is unfeasible to the point of silliness. Tipping-point questions can be asked about the past states of the AIS, though using existing observations to resolve these questions is extraordinarily difficult. This paper uses GCM/RCM and ice-sheet modeling to recreate conditions of the early to mid-Pliocene when atmospheric CO2 concentrations were similar to present day. The focus of PISM application is on modeling grounding-line motion, ice shelf basal melt near the grounding line, and basal sliding. A novel method here, relative to other AIS modeling literature, is an autocorrelation analysis of time series for (modeled) ice mass to find early-warning signs of impending tipping points. A precursor to tipping-point-type destabilization, proximately by classic marine-based ice-sheet retreat, appears to be prolonged surface lowering in response to warm air temperatures.