From cyclic ice streaming to Heinrich-like events: the grow-and-surge instability in the Parallel Ice Sheet Model 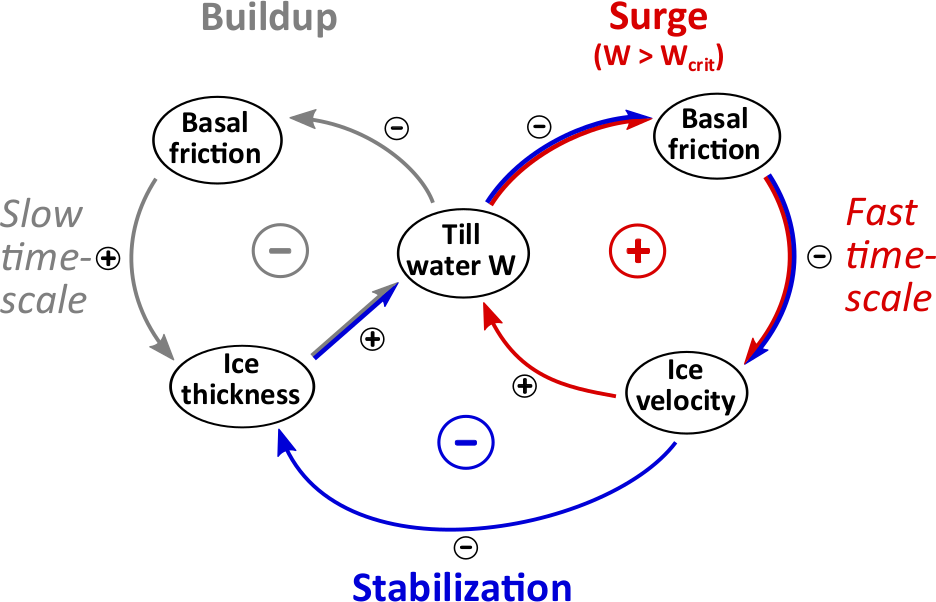 When thermodynamics are coupled to basal sliding through the production of liquid water in a modeled basal till layer, PISM may exhibit cyclic, surge-like behavior. This paper studies such ice-discharge instabilities in PISM for a buttressed ice-sheet-stream-shelf system. When present the simulated surge cycles, which are believed to be fundamentally physical, have 1000 to 5000 year periods in the studied parameter ranges. This work extends prior work on cyclic PISM behavior (Bueler & Brown 2009, van Pelt & Oerlemans 2012) to marine ice sheet conditions, but the 1 km resolution model here is significantly more complete than in those studies. It includes stable0.7 version implementations of enthalpy-based thermodynamics, an improved till-layer hydrology model (Bueler & van Pelt 2015), a sub-grid scheme at the grounding line (Feldman et al 2014), and a buttressed ice shelf. The surface conditions are all constant, independent even of surface elevation, so the cyclic behavior arises purely internally in the ice and the basal layer. This paper includes a new and careful analysis of cyclic behavior, identifying three competing time-scales controlling such cycles. Results suggest that ice sheets of medium thickness may be more susceptible to surging than thin or thick ones. The mechanisms studied here may play a role in Heinrich events of the late-LGM Laurentide Ice Sheet and/or in ice-stream shutdown and reactivation observed in West Antarctica. This is the definitive study of the PISM parameter space for modeled ice stream-shelf systems.