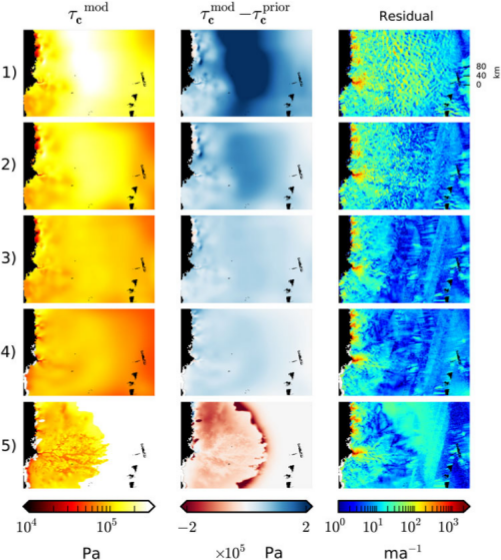 Glaciologists know little about the conditions at the beds of glaciers because these places are so hard to observe directly. Nonetheless most PISM runs need and use a model of the basal conditions. This includes a model of the basal topography, derived from ice-penetrating radar (though necessarily more than the “raw” reflections), and a model of the relation between basal sliding velocity and shear stress (e.g. a power law with uncertain parameters). Inverse modeling can examine the relationship between available surface observations and the conditions at the base. This paper assesses the intermediate quantities in an inverse modeling exercise. Such a calculation generates a (forward) model result for which a norm of the difference between the observations and the model result is minimized in some sense. This difference itself, the residual, contains information which is lost in computing its norm. These authors examine the residual, and other quantities as well, for meaning. There are several types of errors in glaciological inverse modeling which generates basal shear stress. These include observation errors (in the surface elevation and velocity), geometry errors, ice temperature errors, and “model errors”. The last are particularly interesting in the PISM context; a question addressed by this paper is “what are the manifestations of the simplifications in PISM in the sense of residual features?” A particular focus is on the difference between upstream and near-terminus regions of a deep-trough outlet glacier in the Greenland ice sheet.