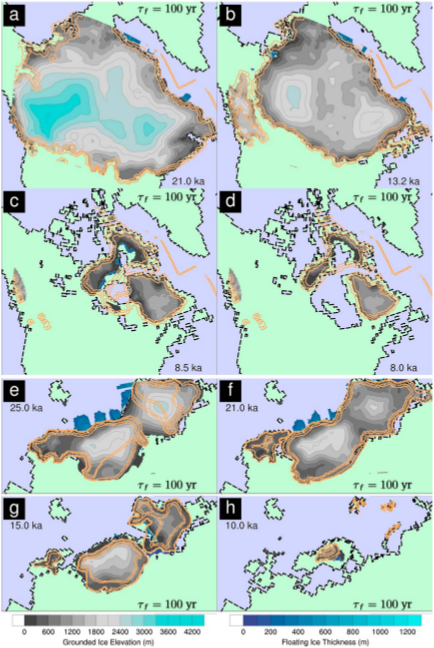 Reconstructions of the time-dependent geometry of ice sheets over the last ice-age cycle (100kyr) can draw from two categories of data. On one hand there are constraints from observations of GIA (glacial isostatic adjustment) and of eustatic sea-level through marine sediment stratigraphy. These are constraints on ice geometry but via temporal and/or spatial integration. On the other hand there is high temporal resolution, but geographically local, information in ice cores about climate over the same period. The former category informs the output (ice thickness and grounding line) of the ice sheet evolution equations while the later inform the input (source term). Like Stuhne & Peltier (2015), this paper connects the two categories using PISM. Because climate-record-driven applications of PISM, such as the SeaRISE project, already use well-posed simulations, a reconciliation of the two data categories is necessarily a temporal/spatial inversion. Here the goal is close fit to the GIA+eustatic-record-based ICE-6G_C ice thickness reconstruction from tuned (“nudged”) climate-input-driven PISM runs. These authors analyze the amount of surface mass balance correction, applied using hypothesized characteristic time scales, needed to reduce the error between PISM output and ICE-6G_C. An example of the usefulness of this methodology is in diagnosing the origin of Meltwater Pulse 1B (-11kyr). They suggest it is more likely to have been in North America than in Antarctica, its origin in the ICE-6G_C reconstruction.