Changing basal conditions during the speed-up of Jakobshavn Isbrae, Greenland 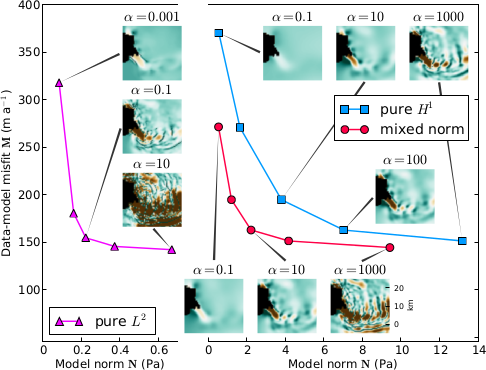 We use a Tikhonov inverse method, with PISM’s SSA as a forward model, to invert for basal conditions from surface velocity data throughout a well-observed period (1985, 2000, 2005, 2006 and 2008) of rapid change. Ice-softness, model norm, and regularization parameter choices are justified using the data-model misfit metric and the L-curve method. The sensitivity of the inversion results to these parameter choices is explored. We find a lowering of effective basal yield stress in the first 7 km upstream from the 2008 grounding line and no significant changes higher upstream. The temporal evolution in the fast flow area is in broad agreement with a Mohr–Coulomb parameterization of basal shear stress, but with a till friction angle much lower than has been measured for till samples. The lowering of effective basal yield stress is significant within the uncertainties of the inversion, but it cannot be ruled out that there are other significant contributors to the acceleration of the glacier.