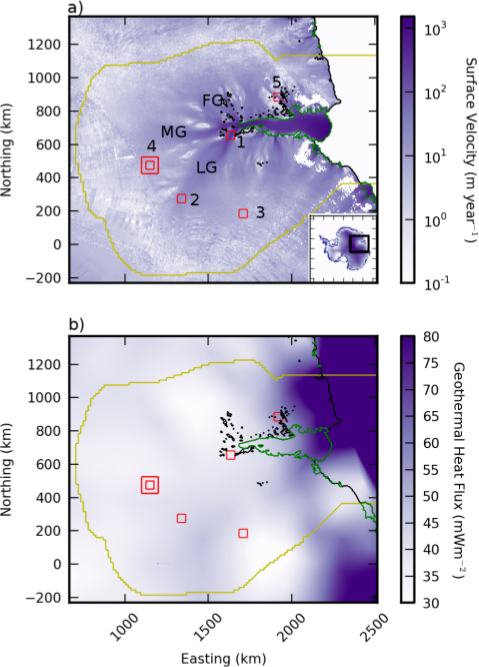 Geothermal flux is one input to a thermo-mechanically coupled ice flow model such as PISM, with significant impact on both ice softness and basal lubrication. Maps of geothermal flux under present-day ice sheets come from nontrivial geophysical inversions, based on seismic and/or magnetic observations, which generate non-unique and (inevitably) smoothed maps. For example, solutions by Shapiro & Fitzwoller (2004) and Fox Maule et al (2005) are familiar to Antarctic ice sheet modelers. However, measurements on ice-free continents show geothermal flux has strong spatial variations including concentrated highs (hot spots). A model like PISM can, at least, demonstrate the effects on ice flow of small-spatial-scale variations in geothermal flux. This paper studies the Lambert-Amery glacial system in East Antarctica, where a variety of evidence indicates high heat flux regions of at least 120 mW per square meter. Localized regions of elevated geothermal flux are tested in PISM simulations. The results show significant effects on slow-moving ice, with influence extending both upstream and downstream of the geothermal anomaly. Fast-moving ice is relatively unaffected. This contrast suggests that the effect of geothermal flux on ice softness may dominate the lubrication effect.